The Llangollen Canal (Welsh: Camlas Llangollen) is a navigable canal crossing the border between England and Wales. The waterway links Llangollen in Denbighshire, north Wales, with Hurleston in south Cheshire, via the town of Ellesmere, Shropshire. 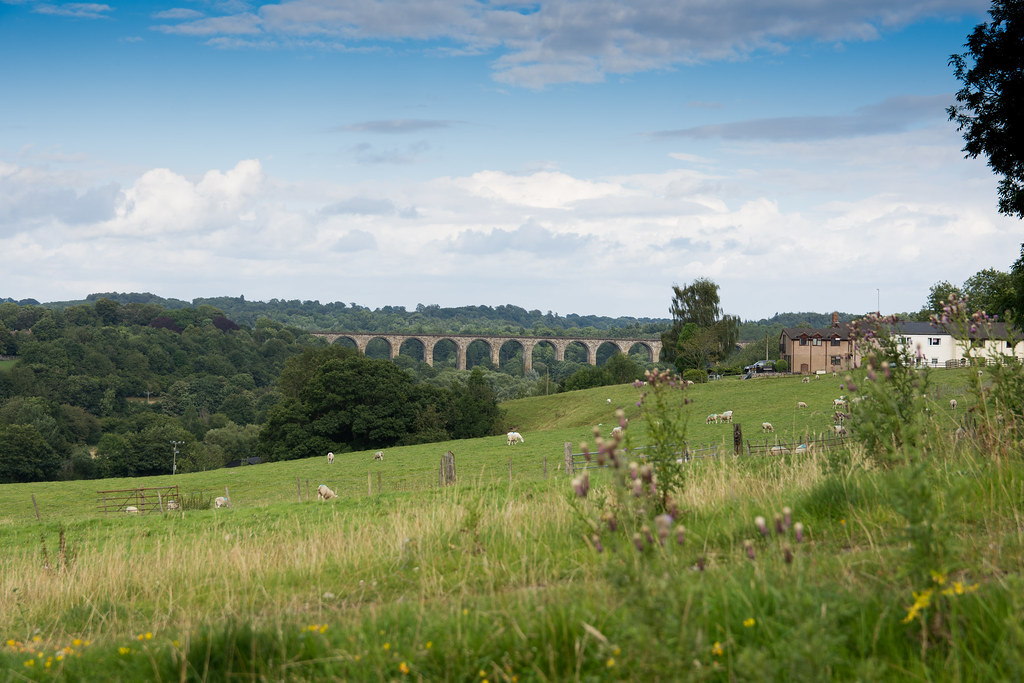 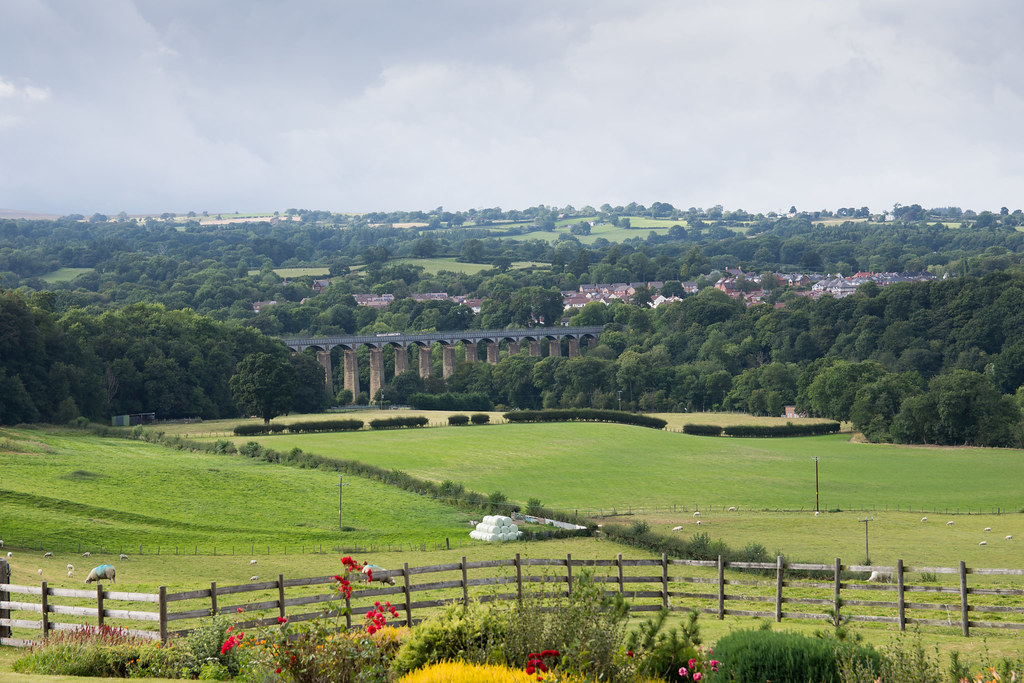 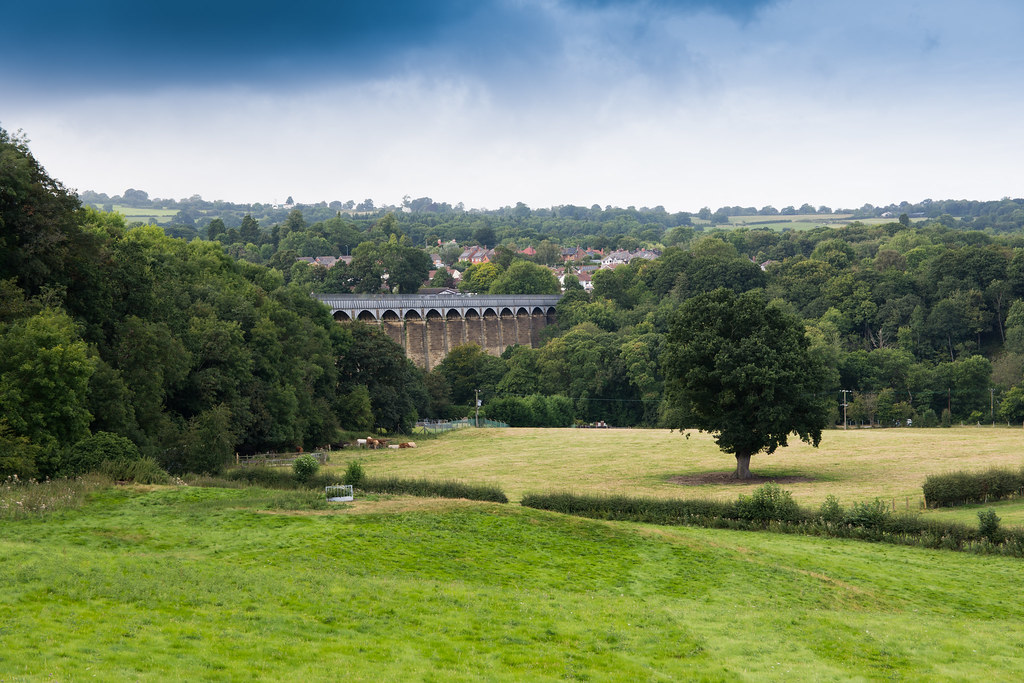 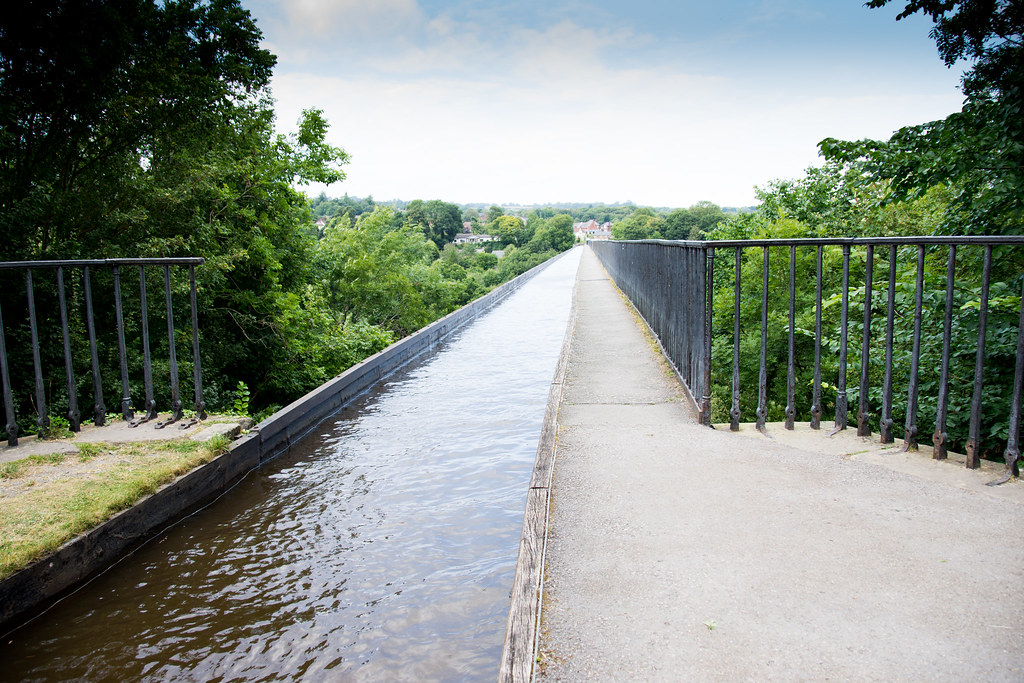 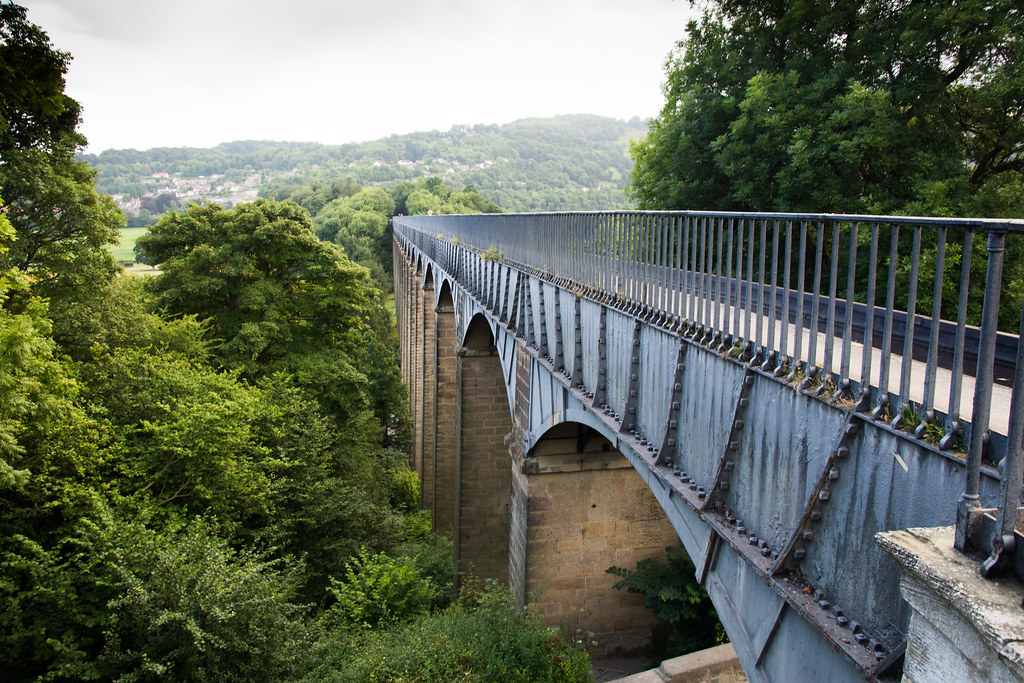 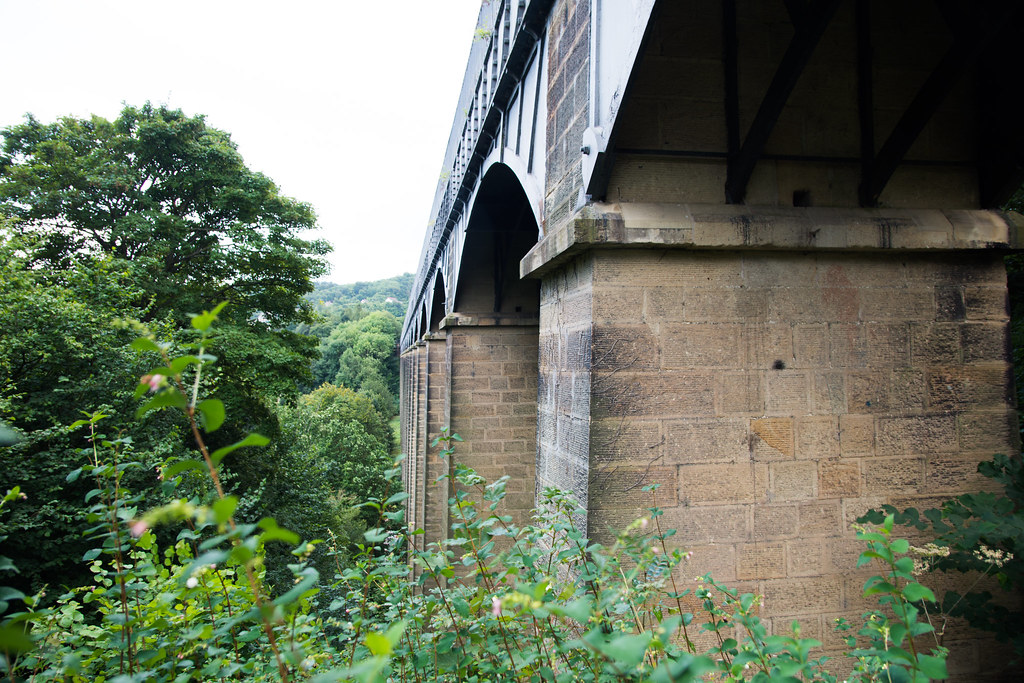 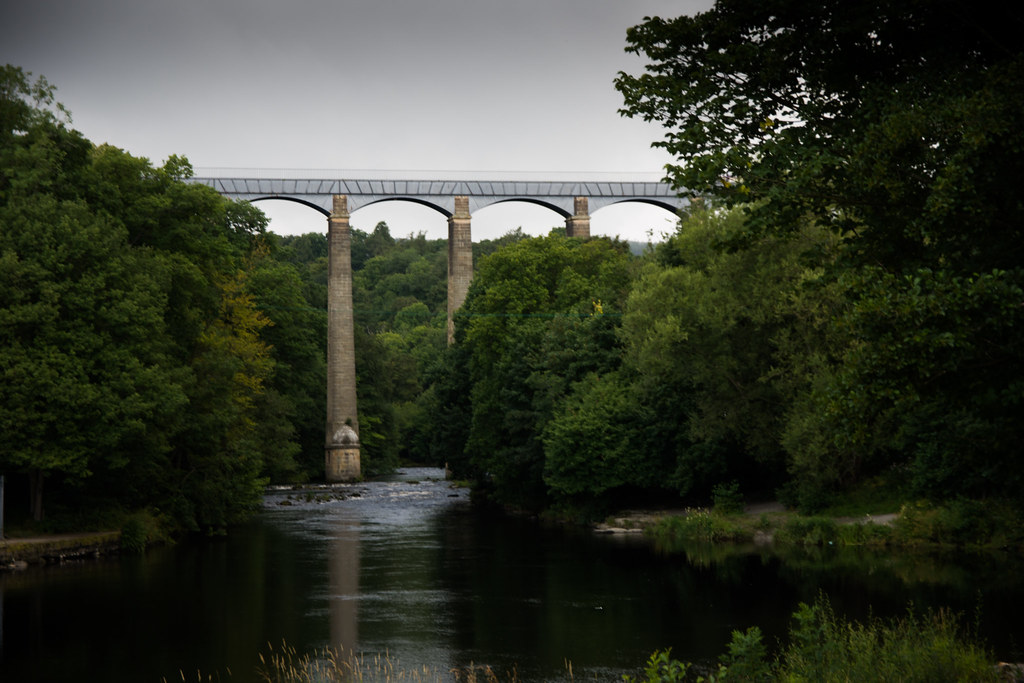 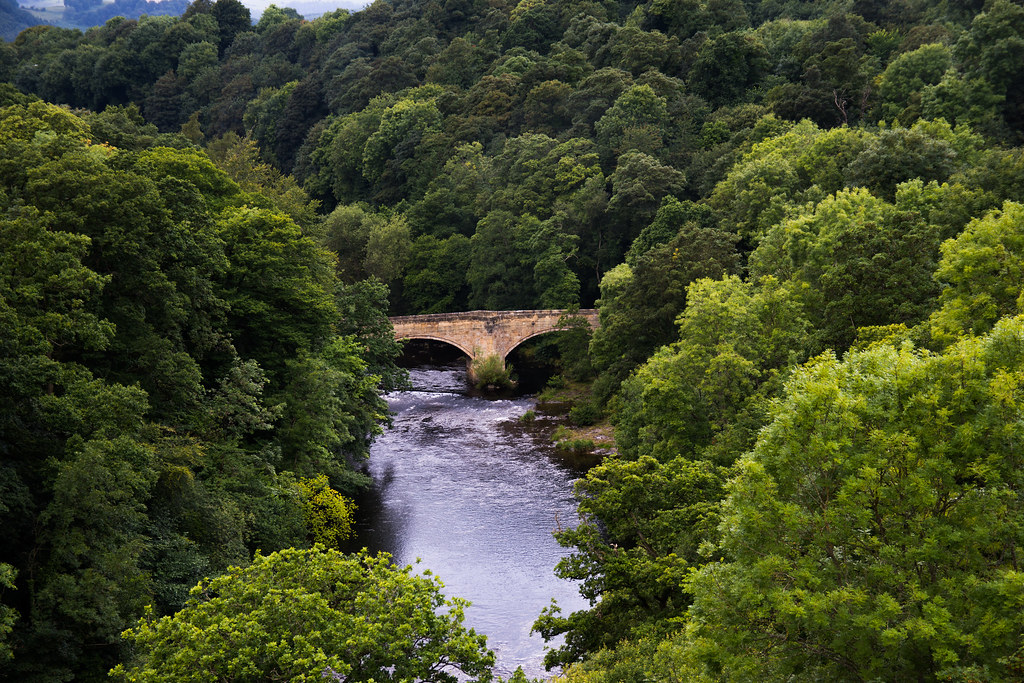 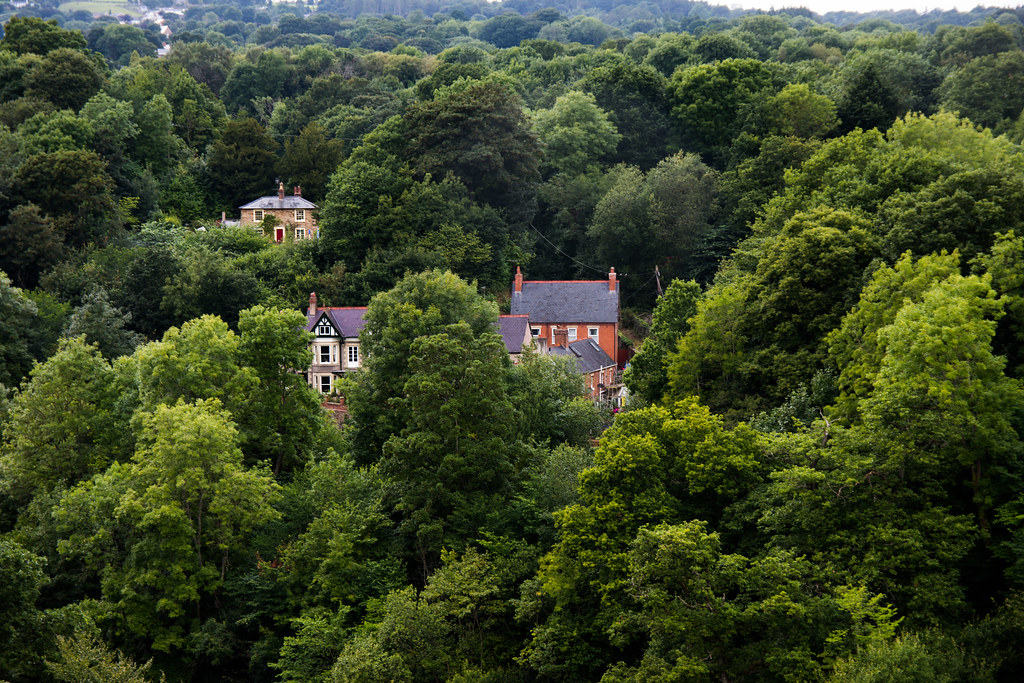 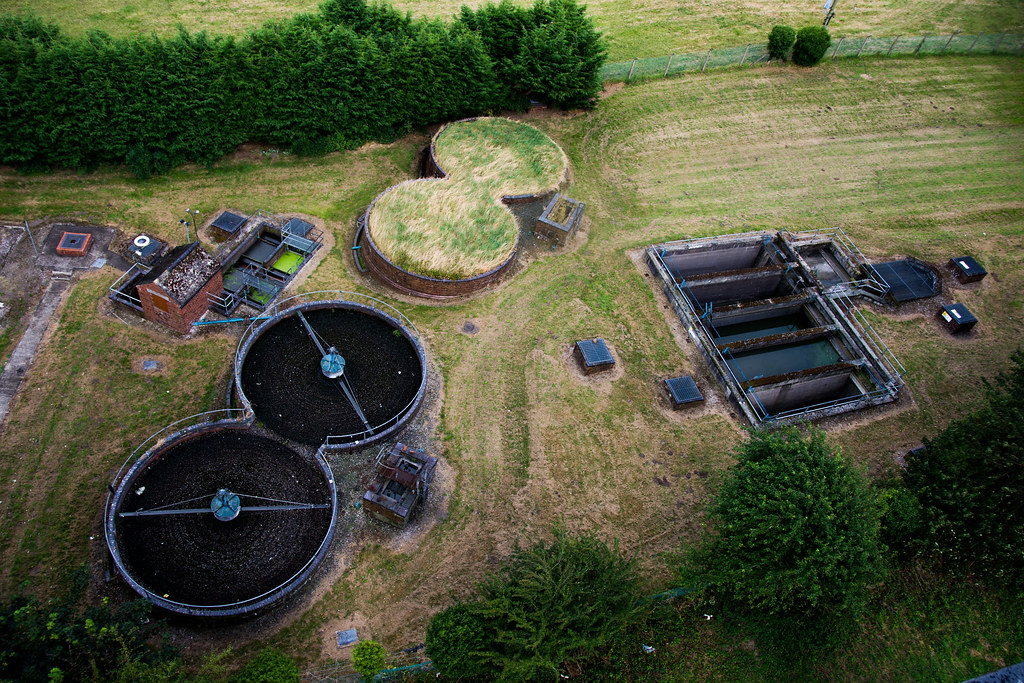 It is one of the most spectacular and scenic canals in Britain. The canal is fed from the River Dee at the Horseshoe Falls just out of Llangollen. You can walk through Darkie Tunnel but beware it is some 1200 feet in length, so a flashlight is recommended, it is one of two tunnels at Chirk, the other is the shorter Whitehurst Tunnel.

The waterway, from which the modern canal takes it name, was built when work to complete the Ellesmere Canal was halted in the early 19th century. The Ellesmere Canal was to be a commercial waterway that linked the Port of Liverpool to the West Midlands. However, due to a variety of problems, such as rising costs and rival competition, the scheme was never finished as intended. As the waterway never reached its proposed main source of water at Moss Valley, Wrexham, a feeder channel was constructed along the side of the Vale of Llangollen to the River Dee; the work created the Horseshoe Falls at Llantysilio.

The Llangollen line became the primary water source from the River Dee for the central section of the incomplete Ellesmere Canal. As such it was not built as a broad-gauge waterway but as a navigable feeder branch. Eventually the Ellesmere Canal became part of the Shropshire Union network in 1846.

In the 1980s, British Waterways took the decision to rename the surviving central sections of the Ellesmere Canal as the Llangollen Canal. As a rebranding of Britain’s industrial waterways as leisure destinations, it has encouraged usage and promoted restoration.

Chirk Aqueduct is a 70-foot (21 m) high and 710-foot (220 m) long navigable aqueduct that carries what is now the Llangollen Canal across the Ceiriog Valley near Chirk, on the England-Wales border, spanning the two countries.

The aqueduct was designed by Thomas Telford for the Ellesmere Canal. The foundation stone was laid on 17 June 1796 and it was completed in 1801. It has a cast iron trough within which the water is contained. The masonry walls hide the cast iron interior. The aqueduct followed Telford’s innovative Longdon-on-Tern Aqueduct on the Shrewsbury Canal, and was a forerunner of the Pontcysyllte Aqueduct, also on the Llangollen Canal. The aqueduct was briefly the tallest navigable one ever built, and it now is Grade II* listed in both England and Wales. It forms part of the Pontcysyllte Aqueduct World Heritage Site.

The Pontcysyllte Aqueduct is a navigable aqueduct that carries the Llangollen Canal over the valley of the River Dee in Wrexham County Borough in north east Wales. Completed in 1805, it is the longest and highest aqueduct in Great Britain, a Grade I Listed Building[1] and a World Heritage Site. The viaduct carries a water passage for a single canal narrow boat as well as a towpath for pedestrians, and is now a popular tourist excursion; boat trips cross the viaduct and return.

When the bridge was built, it linked the villages of Froncysyllte, at the southern end of the bridge in the Cysyllte township of Llangollen parish (from where it takes its name), and Trevor (Trefor in Welsh), at the northern end of the bridge in the Trefor Isaf township, also of Llangollen parish. Both townships were later transferred to Wrexham County Borough following local government reorganisation.

The name Pontcysyllte is in the Welsh language and means “Cysyllte Bridge”. The township of Cysyllte existed for centuries before the bridge was built. For most of its history, the aqueduct was known as Pont y Cysyllte (“Bridge of Cysyllte”). Other translations such as “Bridge of the Junction” or “The Bridge that links” are modern, and incorrect, derived from the literal English translation of cysyllte as “junctions” or “links.”

The aqueduct, built by Thomas Telford and William Jessop, is 336 yd (307 m) long, 4 yd (3.7 m) wide and 5.25 ft (1.60 m) deep. It consists of a cast iron trough supported 126 ft (38 m) above the river on iron arched ribs carried on eighteen hollow masonry piers (pillars). Each of the nineteen spans is 53 ft (16 m) wide. Despite considerable public scepticism, Telford was confident the construction method would work: he had previously built at least one cast-iron trough aqueduct – the Longdon-on-Tern aqueduct on the Shrewsbury Canal. It is still visible in the middle of a field, though the canal was abandoned years ago.